OK, I've been stumped on this one for many months now and I'm hoping someone can help...

In the "Relationship Advice" lesson,  ( https://members.rocketlanguages.com/members/arabic/lessons/728/6-4_relationship-advice ), the word الثقافه is used for 'culture'.  I looked it up in a dictionary and on google and it's definitely the correct spelling and translation.  In the audio however, I have listened to Amira and Hany say it over and over again and I swear it sounds like they're using an 's' sound instead of 'th'!   Everywhere I've looked, 'ث' is pronounced 'th' or sometimes 't', but never 's'.   Since I was listening in my car and for months I thought the were saying السقافه, but that doesn't appear to be a word at all!

So am I audio-hallucinating and hearing incorrectly?  Maybe it's just me?  Or is there some sort of rule or situation where 'ث' can be pronounced as 'س'?

On a different topic...  The first time they  reenact the conversation for the "Relationship Advice" lesson, they play the role-reversed mode instead of the normal one and then go on to discuss it as if it was the regular one!  Either the audio post processing engineer flipped it on accident, or Hany and Amira are playing a prank on the moderator :-)

Hello again Ph0t0n
You're right about the conversation. Actually my only explanation to this now is that it's beneficial to listen to the same conversation from both a male and a female to notice the difference that occurs to the pronouns when they are discussing the same issue.
However, I will definitely forward your concern to the person in charge and make sure that this switch has been intentional.
Thank you and best regards.

Hello Ph0t0n
Kindly note that your concern regarding the audio has been fixed.
Thank you for your feedback.

Thanks eiman-k-elmasry!!  That certainly explains a lot!  I already knew the ث could sound like ت, but I had no idea it could be س as well.  I wish I had known that earlier...  ثانية واحدة would have been much easier to memorize! :-)

So many things to learn, so little time.  Sometimes I love this language... and sometimes it drives me crazy - so many dialects and so many ways to say the same thing! 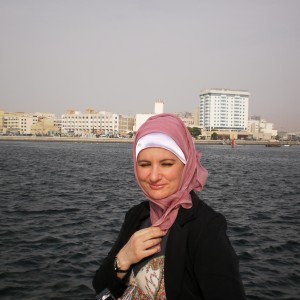 as gim and tha