To provide the most effective online language learning courses possible

A personal message from CEO and co-founder, Jason Oxenham

I'm glad that you're here, and I'm excited to tell you a little more about Rocket Languages. 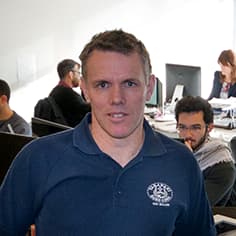 Let’s rewind to 2004. I’d been trying to learn French for a few years. I’d spent a lot of time doing everything that language learners are “supposed” to do. I stocked up on textbooks, I attended classes, and I tried software program after software program. But nothing seemed to work. I wasn’t much further than when I’d started—unless being able to say, “The cow is on the car,” is progress!

I guess I wasn’t the ideal candidate for learning a second language.

I knew I couldn’t be the only person having trouble. So at the start of 2004, my friend and co-founder, Mark Ling, and I put our heads together. What other challenges were holding people back from successfully learning a second language? And how could we help them overcome them?

Within 12 months we had created both Rocket Spanish and Rocket French by combining engaging listening activities, easy-to-follow grammar lessons and useful vocabulary words. Both courses were instant hits. Users sent us rave reviews, saying just how much better our courses were than anything else on the market.

By late 2004, we were the first company to provide online language learning courses, even if they were just MP3 files and PDFs!

With the success of Rocket Spanish and Rocket French, we started expanding the number of languages we offered. Right now the Rocket Languages catalog includes:

Not only that, but our member surveys told us that our learners were hungry for more. We listened and built advanced levels of our most popular languages.

As technology developed over the years, we updated and refined our courses to keep pace with advances in e-learning and customer experience standards.

The online language learning market has changed immensely since 2004. For instance:

So, how do we intend to stay ahead of the pack?

It all comes back to the vision that we had, and still have, for Rocket Languages:

To provide the most effective online language learning courses possible

Foremost, this means that our courses must work for everyone.

Having reviewed many methods of learning a second language, I can confidently say that this isn’t the case with most products out there.

We build our vision into everything that we do here at Rocket Languages. We will do anything and everything to make your language-learning experience better.

So, I know that Rocket Languages will remain a leader in online language learning for many years to come!

Our experienced team will get your language learning heading in the right direction!