Es or sie as the accusative? 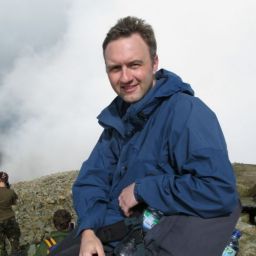 Hi, I am currently recapping RG Premium before embarking upon RG Premium Plus in earnest and have a query about lesson 3.2 when Nik is asking for directions to the exhibition. As Ausstellung is feminine, I am unclear why Paul replies 'Es ist night weit' rather than 'Sie ist nicht weit'. Later in the conversation Paul also says 'Sie können es nicht verfehlen!'. Why does he not say 'Sie können sie nicht verfehlen!' as the accusative is feminine? Thanks if you can clarify this, Regards, Peter.

Good question Peter and one I've asked myself, although not on this particular lesson but on some others. Unfortunately, I've never gotten an answer that I could understand, so perhaps Paul can clear it up for us. There are a number of places where the neuter pronoun is used to refer to a feminine or masculine noun, although there are others where the pronoun matches the noun. Frankly, I don't get it either. Byron

Hi Peter, Both versions are grammatically correct. Another option would have been to say 'Sie können die nicht verfehlen!'. The reason why it is in the lesson is because it is more common to use 'es' when talking about an object without naming it . Lieben Gruß Paul

Thank you both for your swift replies. I'll keep an eye out for further examples in the later lessons. Peter.

Hi Guys, So to belabor the point a little more, Paul are you saying it doesn't really matter if you use the neuter gender pronoun (es) to refer to a noun that is either masculine or feminine for objects that in English would be considered gender neutral e.g. suitcases and jackets? In the lessons, there is an example of Koffer (masculine) referenced by "es" and there is another example where Jacke (feminine) is referenced by the feminine pronoun "sie". I could never see any reason for the apparent inconsistency although in the larger scheme of things regarding my language studies it is certainly a trivial point. regards, Byron

Hi Byron, For objects in singular form it doesn't matter for spoken German. With that said keep in mind that I can't give you a general rule for all cases. The sentence with the 'koffer' is different from the one Peter mentions. In the sentence 'Es ist ein grosser schwarzer Koffer, the masculine indefinite article is reffering to the word 'Koffer' where as for "es ist nicht weit" it is reffering to the gallery or the place the gallery is in. It is the common everyday German and no one would misunderstand or correct you. For written German "der, den, die, das" pronouns are replaced by "dieser, diesen, diese, dieses" or "jene, jener, jenes" and "welche, welcher, welches" instead. Although correct Germans in general avoid the pronouns 'sie, er' when referencing objects and use the articles instead. Hope you coping well with the low temperatures Paul

Thanks Paul. That helps a lot although I expect I will never totally understand all these little exceptions unless I were to live in Germany for 10 years which isn't going to happen. I walked my big malamute 3 times yesterday for about a mile each in -50 F wind chill temperatures, same as usual. When you grow up in cold climates you learn how to dress for it. That said, I'm looking forward to warmer temperatures. -10 F (actual temperature) this AM felt not too bad.