Just as in English, German nouns can either be singular, such as “cat” or Katze , or plural (i.e., more than one), like “cats” or Katzen.

The first thing that you must learn about German, however, is that all German nouns also have a gender. In other words, all objects and living things are grouped as either; 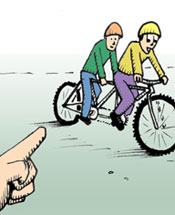 The concept of gender can feel confusing for new students of the German language. Having a gender does not mean that nouns actually refer to male, female or neuter things, although, in most circumstances, the nouns that refer to males (such as a male doctor or a male animal) are masculine, while nouns that refer to females are generally feminine (such as a female doctor or female animal).

You may find it impossible to figure out the gender of other nouns, however. For example, how would anyone know whether the word for hotel or room is masculine, feminine or neuter? ( Hotel and Zimmer are both neuter.)

In most cases the choice of gender seems random, which it basically is! In German the sun (Sonne) is feminine, whereas the moon (Mond) is masculine. In French and Spanish for example it is exactly the opposite.

Here are some of the most basic German nouns to get you started. Further on in this lesson we will look at the pronunciation of these and more German nouns.

Rocket Record lets you perfect your German pronunciation. Just listen to the native speaker audio and then use the microphone icon to record yourself. Once you’re done, you’ll get a score out of 100 on your pronunciation and can listen to your own audio playback. (Use a headset mic for best results.) Problems? Click here!